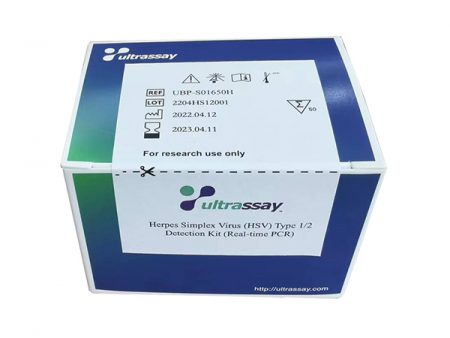 [Research Use Only]
This kit is used for qualitative detection of Herpes Simplex Virus Type 1 (HSV1) and Herpes Simplex Virus Type 2 (HSV2) to help detection patients with suspected HSV infections [1-2].
Sexually transmitted diseases (STD) are still one of the major threats to global public health security. Such diseases can lead to infertility, premature fetal delivery, tumor and various serious complications [3-6]. There are many types of STD pathogens, including bacteria, viruses, chlamydia, mycoplasma and spirochetes, among which Neisseria gonorrhoeae, Mycoplasma genitalium, Chlamydia trachomatis, HSV1, HSV2, Mycoplasma hominis, and Ureaplasma urealyticum are common.
Genital herpes is a common sexually transmitted disease caused by HSV2, which is highly infectious. In recent years, the incidence of genital herpes has increased significantly, and due to an increase in risky sexual behaviors, the detection rate for HSV1 in genital herpes has increased and was reported to be as high as 20%-30%. An initial infection with the genital herpes virus is mostly silent without obvious klinical symptoms except local herpes in the mucosa or skin of a few patients. Since genital herpes is characterized by lifelong viral shedding and proneness towards recurrence, it is important to screen the pathogens as soon as possible and block its transmission.
This kit is used to detect HSV1 and HSV2 DNA. The test results shall not be used as the sole outcome measure for evaluation of the patient’s condition but must be interpreted in conjunction with the patient’s klinical manifestations and other laboratory findings for comprehensive analysis.