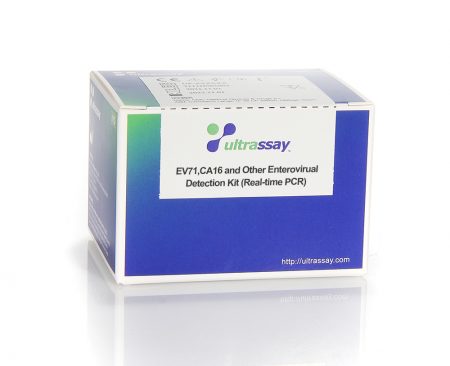 Enteroviruses that cause HFMD include more than 30 kinds of viruses, such as poliovirus, coxsackie virus, ECHO virus and New enterovirus. Among which EV71 and CA16 enteroviruses are the most common pathogens, and EV71 infection is the main cause of severe cases and deaths.

Carry out enterovirus nucleic acid test in the infant eruption period, and even before the eruption showing continuous fever, poor mental health, vomiting and other symptoms to clarify whether the patient has enterovirus infection to, so as to early prevention, early treatment
For severe cases with atypical rash, clinical diagnosis is diﬃcult, and it is more necessary to carry out etiological diagnosis to deter- mine whether there is enterovirus infection
HFMD has a fast onset rate, and the detection of enterovirus nucleic acid can achieve early intervention and early blocking.

[Testing Principle]
Multiple ﬂuorescent PCR was used to simultaneously detect EV71, CA16 and other enteroviruses with diﬀerent ﬂuorescent probes in a single tube one time.